The History of SaaS: How Cloud Computing came to be 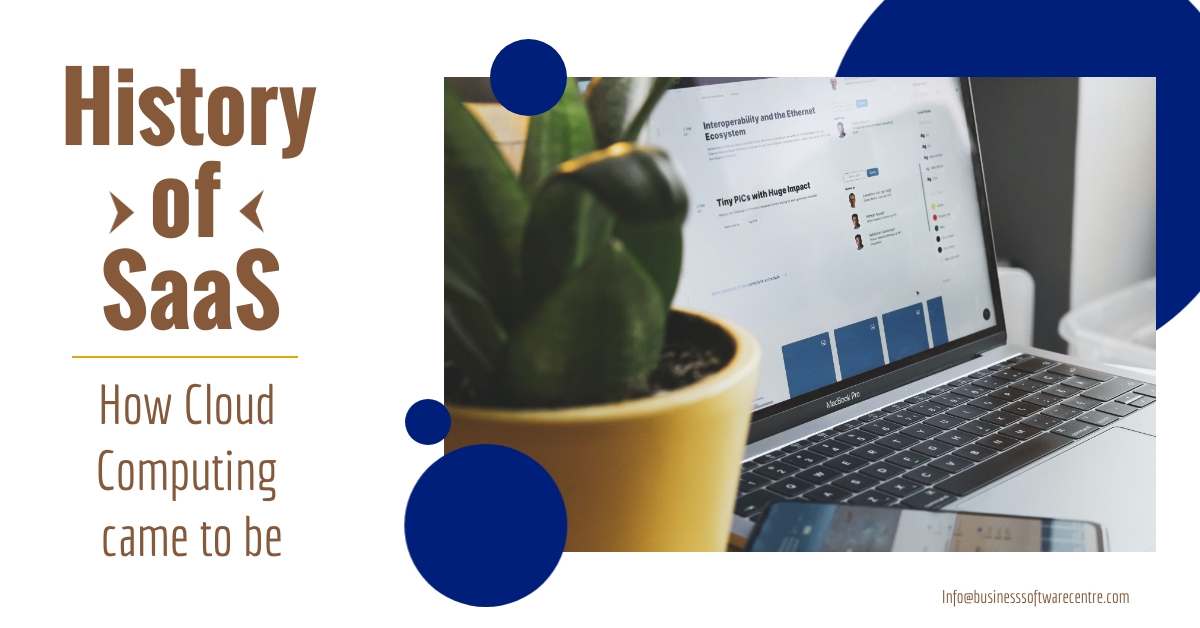 When you think of SaaS, what comes to mind? I would say most people jump to SaaS pioneer companies like DocuSign or Salesforce, since they are all big names in the game today.

SaaS is now a regular way of purchasing and using software. With it’s cloud benefits and month-to-month subscriptions, SaaS is not only growing, but surpassing the downloadable software of the past with projections showing continued growth for the future.

Even though SaaS has changed the way businesses operates, especially during the year of remote workers and Covid-19, SaaS began on an experimental level back in the 1960s. Known as ‘a time sharing system,’ SaaS started as a way to combat big and expensive computers that many businesses could not afford.

In this article, we will review key moments in SaaS history and share what you need to know about software as a service.

SaaS is the most popular form of cloud computing. Arguably, SaaS is the easiest form of cloud computing too, with little to none pressure on managing your own software. Likewise, SaaS is out-of-the-box ready to go! You do not need to install SaaS onto your device, rather your applications can be accessed via cloud. An example of SaaS is Microsoft Office 365, where you can share files via Microsoft Teams and edit in real-time using  the cloud!

Other key characteristics of SaaS include:

The History of SaaS

Though computers did exist in the 1960’s. their ability to perform functions took a lot of time. With the help of MIT, the first demonstrated SaaS was developed and known as Compatible Time-Sharing System (CTSS). CTSS not only reduced the cost of computers, but helped them become a bit faster with computing!

Over the next 30 years, computers kept improving, becoming faster, more affordable, and more compact, which allowed for businesses to switch from manual to more automatic practices. This began the ‘ownership’ idea with personal computers, which incorporated paid on-premise, downloadable software in order to do functions / tasks.

Another big boom was the rise of the dot com, which can be attributed to 1994. Netscape Navigator shared the Secure Sockets Layer (SSL) protocol, enabling encrypted transmission of data over the internet so customers could shop online without fear of losing their data/ personal information. With this, there was development of online marketplaces, which now Amazon dominates.

Additionally, the growth of internet usage helped cloud computing develop into what it is today!

On-premise was the way we used to do things, but after the development of the cloud it is easy to see that on-premise should be left in the past. A huge downfall of on-premise is where and how the applications are managed. You must use the same device the application is installed on to use it. Additionally, you are required to manage it on your own, which means ensuring you perform the updates, track your usage, and ensure you are not in violation of your licensing agreements.

When using on-premise, you must manage:

But thankfully SaaS takes away all that pain and worry by automating business practices through the cloud.

Cloud computing allows software to be installed on remote servers. This helps  reduce the amount of maintenance on IT, as well as encourages a global workforce, because cloud software can be accessed from anywhere.  SaaS developers often focus on being the best-of-the-breed in their core area of focus/ function, which allows businesses to pick and choose which software they need for each function they are looking to improve. Of course, this boosted the creation of SaaS service providers, which is the best option for helping businesses manage their current software usage and spend.

Key Figures and Moments in SaaS

Event #1 – The invention of the software compiler

In 1952 Grace Hopper was working for the US Navy when she created the first software compiler for the A-0 programming language. This meant for the first time software could be written once and then transferred from one computer to run on many others. The idea was further developed by IBM and it became the norm for software to be written once and used on many different devices for different users. This had implications for software in that it became a product in it’s own right. Interestingly when Grace Hopper was asked why she created the compiler she explained that basically she was lazy and didn’t want to keep doing the same thing over again when she could do it once and transfer it many times.

Early in the career of Bill Gates he became frustrated by hobbyists taking the software that he and Paul Allen had created and copying it and using many times. In February 1976 he wrote an open letter to computer users complaining that the hard work of computer programmers was being taken and used free of charge. He distributed the letter through the computer magazines of the day and started to put in place his strategy for selling software licenses. Microsoft followed the model of selling software that would work on personal computers made by other vendors and their licenses would need to be paid for.

In the late 1990s Larry Ellison was discussing the future of computing with Evan Goldberg and Marc Benioff. The internet was gaining popularity and all three were contemplating the impact this would have on business software. The discussion focussed on what has become known as cloud computing and how this would change the face of software. Business Insider magazine pinpoints this discussion as the invention of cloud computing and the SaaS business model. Evan Goldberg went on to found Netsuite and Marc Benioff started Salesforce.com, the rest is history.

If you are looking to switch your business to the cloud, get in contact with us today! Info@businesssoftwarecentre.com

This site uses Akismet to reduce spam. Learn how your comment data is processed.

TBSC is working closely with Microsoft to ensure your success story with our product, Smarter SaaS for Microsoft 365. We pride ourselves with our quick, efficient, and cost effective software that benefit our partners and Read more…

Does your IT department track and monitor your software usage for Microsoft 365 License Compliance? Chances are this is a forgotten area of focus, especially if you do not have a Software Asset Manager on Read more…

At TBSC we value helping the community and have teamed up with the Geoff Worsley fundraiser for Brainstrust. Brainstrust provides the education, care, and support throughout the treatment process. They also offer cutting-edge research and Read more…

We use cookies on our website to give you the most relevant experience by remembering your preferences and repeat visits. By clicking “Accept”, you consent to the use of ALL the cookies.
Cookie settingsACCEPT
Manage consent

This website uses cookies to improve your experience while you navigate through the website. Out of these, the cookies that are categorized as necessary are stored on your browser as they are essential for the working of basic functionalities of the website. We also use third-party cookies that help us analyze and understand how you use this website. These cookies will be stored in your browser only with your consent. You also have the option to opt-out of these cookies. But opting out of some of these cookies may affect your browsing experience.
Necessary Always Enabled

Performance cookies are used to understand and analyze the key performance indexes of the website which helps in delivering a better user experience for the visitors.

Analytical cookies are used to understand how visitors interact with the website. These cookies help provide information on metrics the number of visitors, bounce rate, traffic source, etc.

Advertisement cookies are used to provide visitors with relevant ads and marketing campaigns. These cookies track visitors across websites and collect information to provide customized ads.

Other uncategorized cookies are those that are being analyzed and have not been classified into a category as yet.